Elon Musk Gets $2.1 Billion Richer This Week As Tesla Becomes America’s Most Valuable Car Company Ever

Elon Musk kicked off a Tuesday presentation at Tesla’s Shanghai plant by tearing off his blazer and dancing enthusiastically to a song by his girlfriend, pop star Grimes. The eccentric CEO and founder has a multibillion-dollar reason to be in such high spirits.

Tesla stock has spiked since the company revealed last week that it delivered a record 112,000 vehicles in the fourth quarter, modestly exceeding the consensus estimate among analysts, and announced that its first full-scale production plant outside the U.S.—in Shanghai, China—is now delivering vehicles.

Shares surged 13% in the week through January 9—boosting Musk’s net worth by $2.1 billion, to $28.8 billion. The 49-year-old billionaire is currently the 34th-richest person in the world. Musk owns nearly 22% of Tesla’s stock, which accounts for roughly half of his fortune. He also has an estimated $12.5 billion stake in SpaceX, his privately held aerospace company known for reusable rockets.

On Tuesday, Tesla’s market cap hit $83 billion, making it the most valuable car company in American history (not accounting for inflation), besting Ford’s market value of $81 billion in 1999, according to data from Dow Jones. By Friday’s market close, Tesla’s market cap had crept all the way up to $85.8 billion. That is close behind the $87 billion combined market cap of GM and Ford. 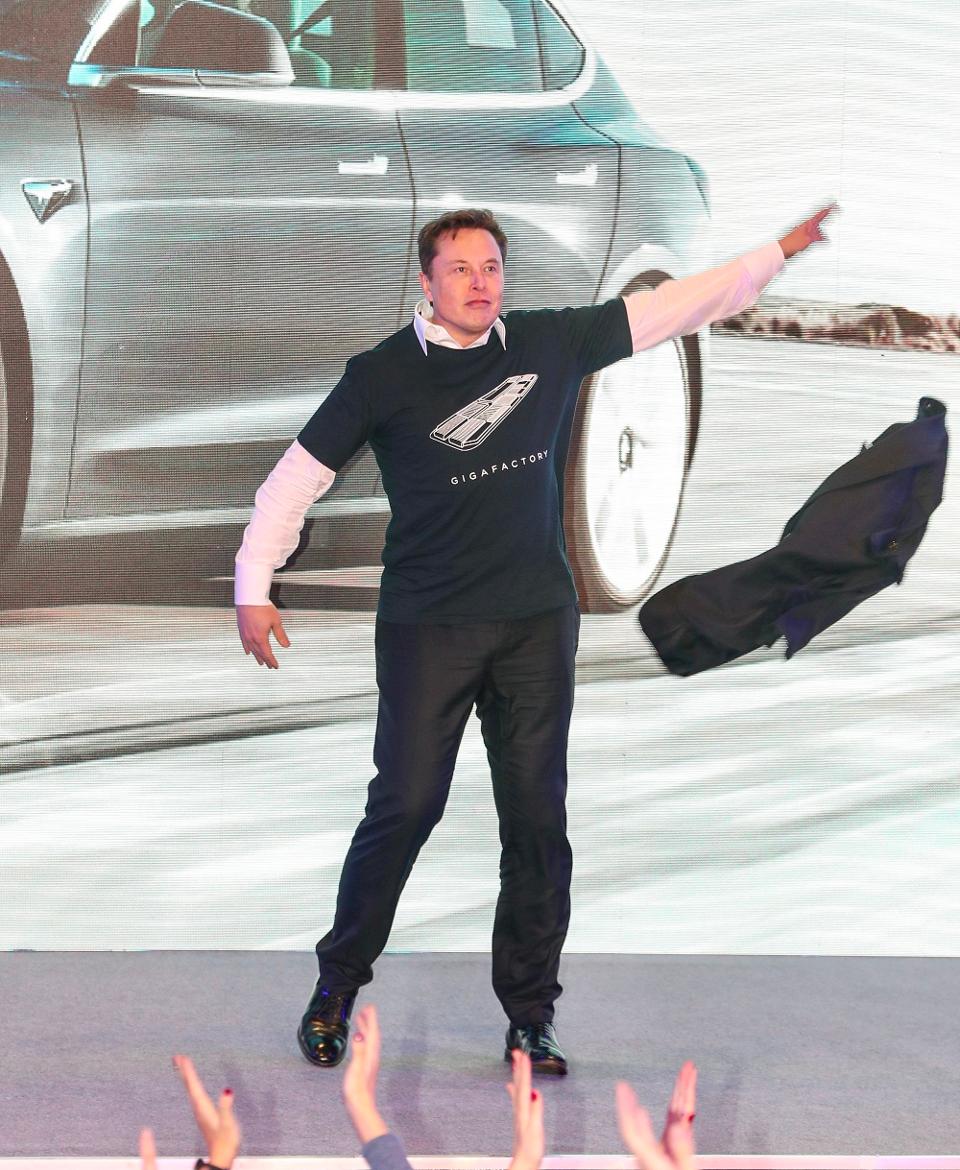 Tesla stock has doubled since October, but there have been road bumps along the way. In November, Musk’s net worth fell by $768 million in a single day after the botched unveiling of the Cybertruck sunk Tesla’s share price by 6%. And Wall Street analysts remain highly divided on the company. Out of a group of 36 analysts tracked by Bloomberg, 15 have issued sell ratings, 11 have issued holds and 10 have issued buys.

Wedbush analyst Daniel Ives is confident in Tesla, highlighting growth potential in China. “We believe Tesla’s ability to ramp production and demand in the key China region during the course of 2020 will be a major swing factor on the stock,” Ives wrote in a research note.

JPMorgan analyst Ryan Brinkman maintained his sell rating. Though he raised his price target, Brinkman noted that deliveries for the more expensive Models S and X (versus the Model 3) have fallen 30% year over year. “We remain underweight-rated on TSLA shares, however, on what we see as a lofty valuation (an $80 billion market cap after its recent run for a company about to report its tenth consecutive annual net loss) coupled with high investor expectations and high execution risk,” Brinkman wrote.

CFRA analyst Garrett Nelson, meanwhile, downgraded his rating from hold to sell. “In our view, TSLA shares now appear fully valued after a meteoric run-up since bottoming at $177 a share last June and are not reflecting various near-term risks,” Nelson wrote. “With TSLA’s market cap now exceeding GM and Ford combined despite having only about 3% of joint vehicle sales volume, we think investors have given TSLA plenty of credit for future growth, raising execution risk.”

It has been a busy week for Musk. His girlfriend, Grimes, has posted two pregnancy photos on Instagram. Musk has yet to formally confirm he is the father, but in response to a tweeted video of him dancing to Grimes’ song, “Oblivion,” he cheekily replied, “Haha spectrum af” with a baby emoji. He also commented on Grimes’ tweet of a pregnancy photo with “x is y.”

If Tesla’s run-up continues, its share price may double again by the time Musk’s seventh child is born—adding billions to his already massive net worth.